Adding piping to a seam can make a beautiful statement.  It can add an interesting splash of color to an otherwise dull seam.  I’m going to show you how easy it is to add piping to any seam.  First off lets look at some feet.

The foot on the left is a zipper foot.  Most sewing machines come with a zipper foot.  This can be used to put in piping, so no additional feet are needed.  But if you’re willing to invest a few dollars, you can get a piping foot (shown on the right), and adding piping becomes simple. 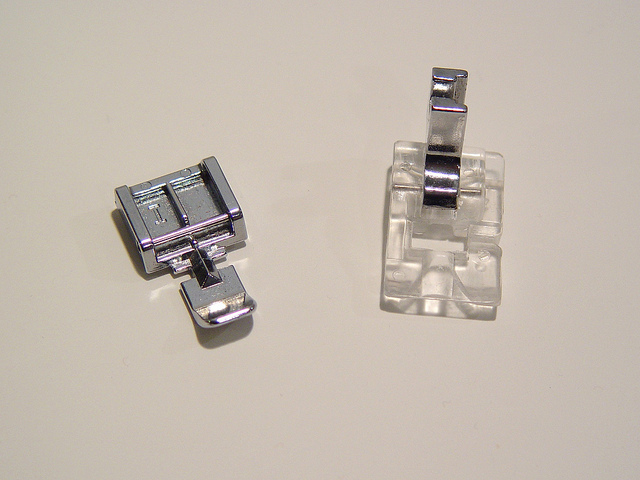 A piping foot is shaped perfectly to follow the piping and sew it down at just the right place.  Don’t worry, I’ll show you how to use both feet to put in your piping. 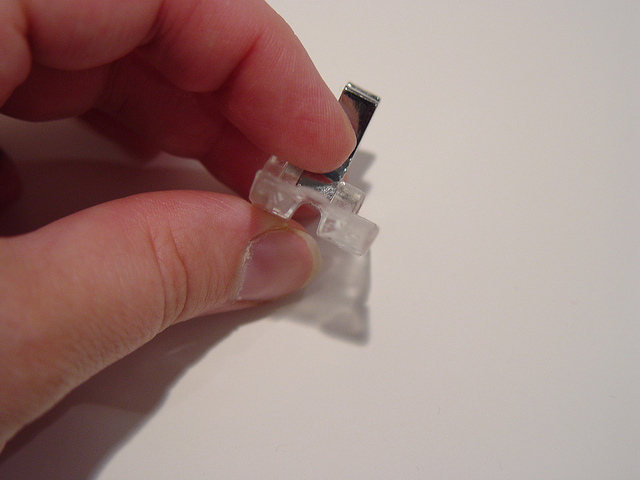 Here’s what piping looks like.  It’s a small piece of cording wrapped in fabric and sewn in place.  It’s not difficult to make your own, but for the most part, purchasing it is very nice. 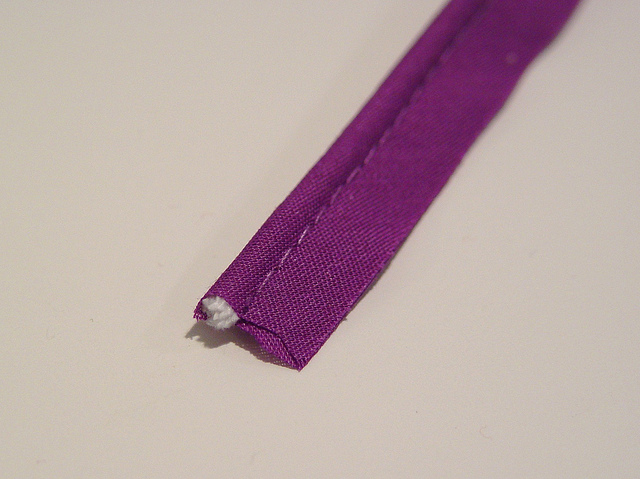 When attaching piping to your fabric, place it raw sides together, so that the cording is facing inward.  Pin with edges aligned.  Store-bought piping leaves 3/8″ of fabric from the sewn line on the piping to the edge of the piping, so we can easily use a 3/8″ seam allowance for our projects.  When pinning your piping to your fabric, leave an extra tail of about 2″ – 3″. 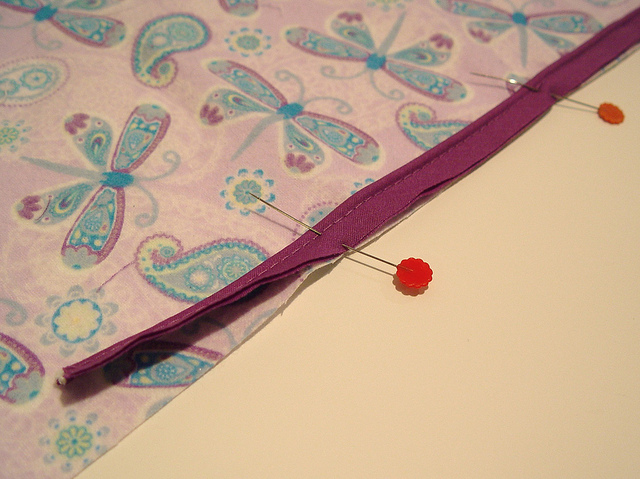 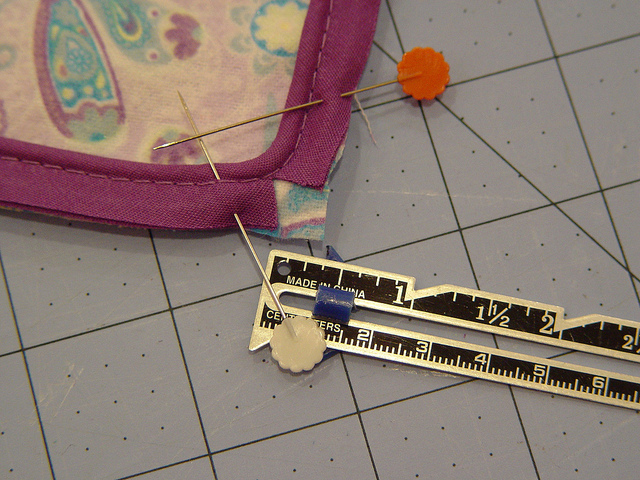 When you’ve pinned all the way around, leave a tail at the end. 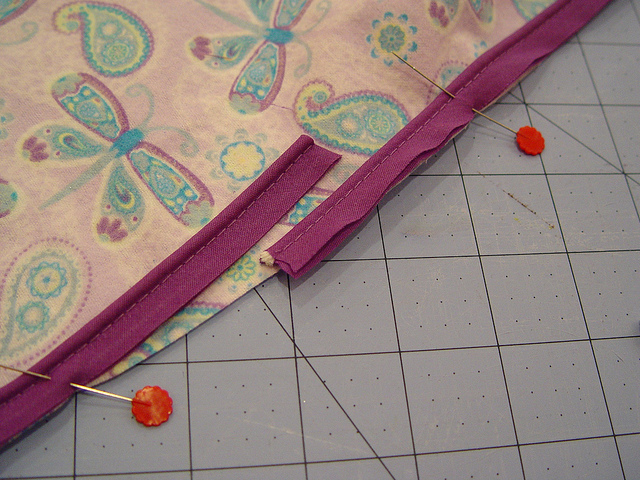 Using a zipper foot to sew:

Attach your zipper foot and place the foot so that it’s next to the cording in the piping.  Move the needle so that it matches up with the stitching.  I moved mine over as far as I could to the left. 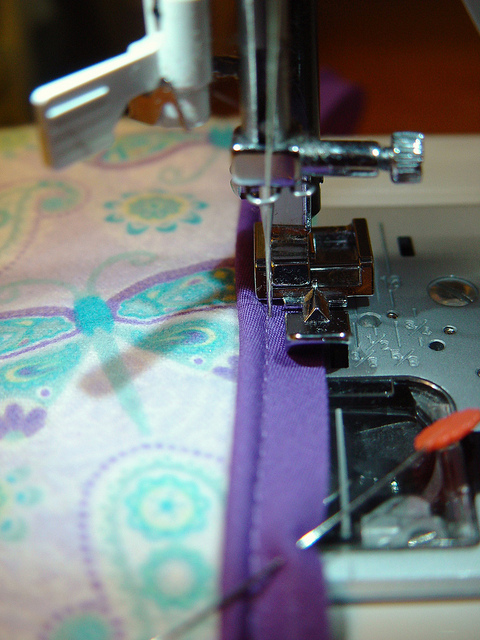 Using a piping foot to sew:

Attach your piping foot and place the “bump” of the piping in the hole of the foot.  Move the needle so that it is lined up with the stitching on the piping. 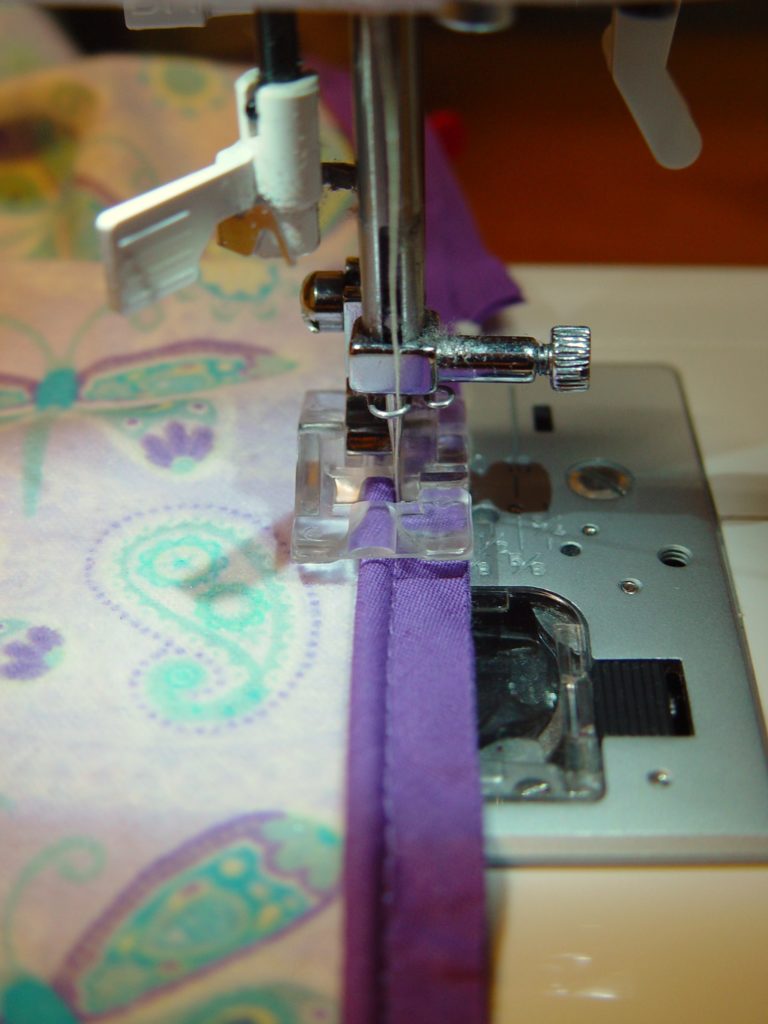 Sew around your project, following the piping all the way around, working corners carefully.  Make sure you leave 2″ – 3″ not sewn at each end. 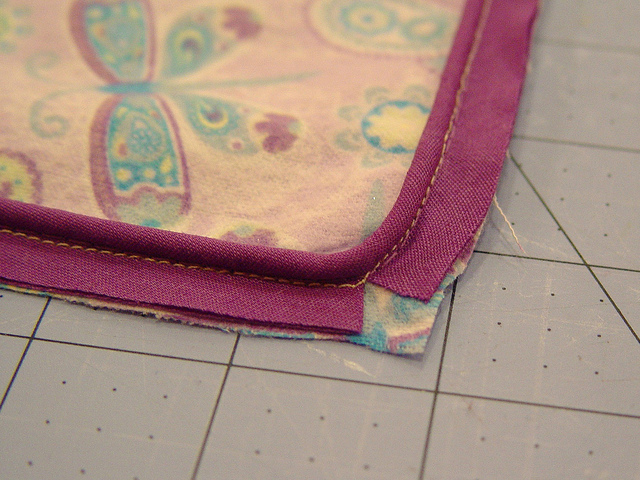 When you get to the end, stop a few inches before.  Pick one side of the piping and open up the stitching with a seam ripper. 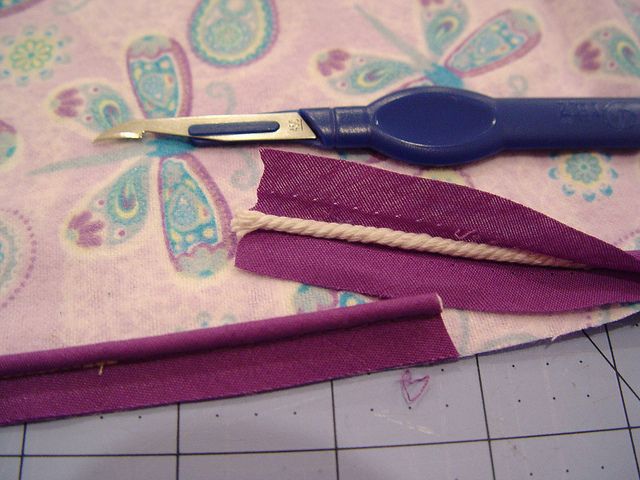 Line up where the piping will meet when on top of each other and trim the excess cording so there’s no overlap of that. 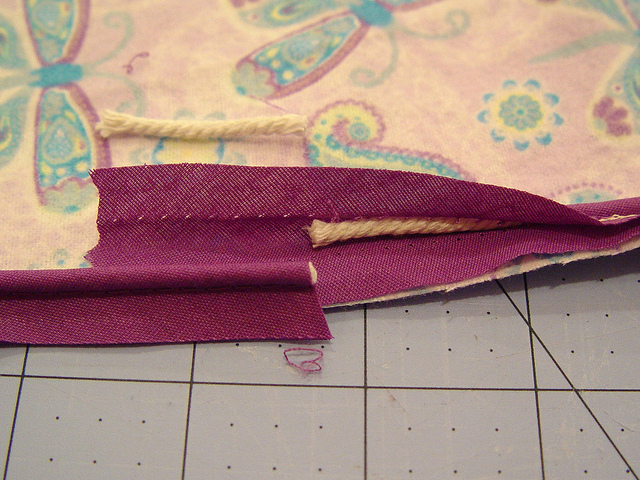 Fold the fabric covering the cording (on the side you trimmed) over the cording. 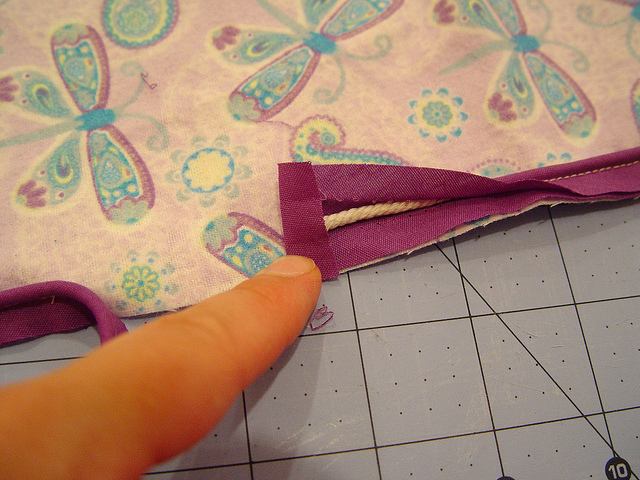 Place the other bit of piping on top. 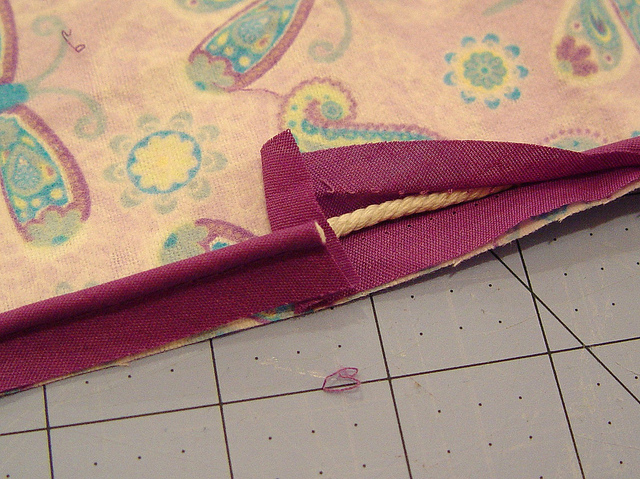 Fold over the fabric covering the cording over the other piece as well and pin in place.  Sew the remaining bit of piping down to secure. 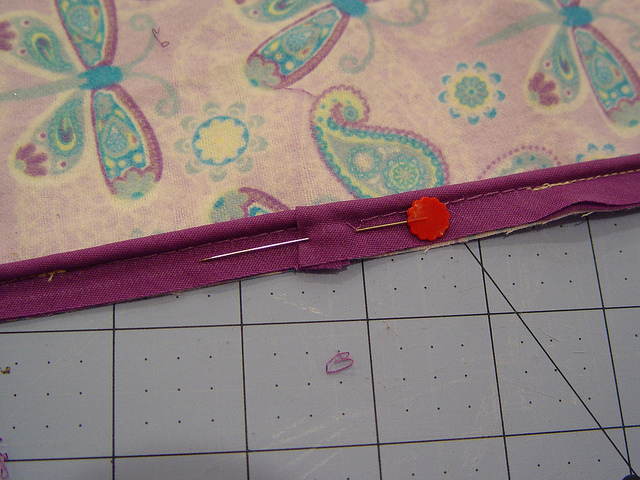 When adding another piece of fabric on top of the one with the piping attached, align the edges as normal, placing right sides together.  If you’re using a piping foot, you have a nice advantage because you’ll automatically follow the piping since it’s in the ditch of the foot.  A zipper foot can be used, but you’ll have to be a bit more careful. 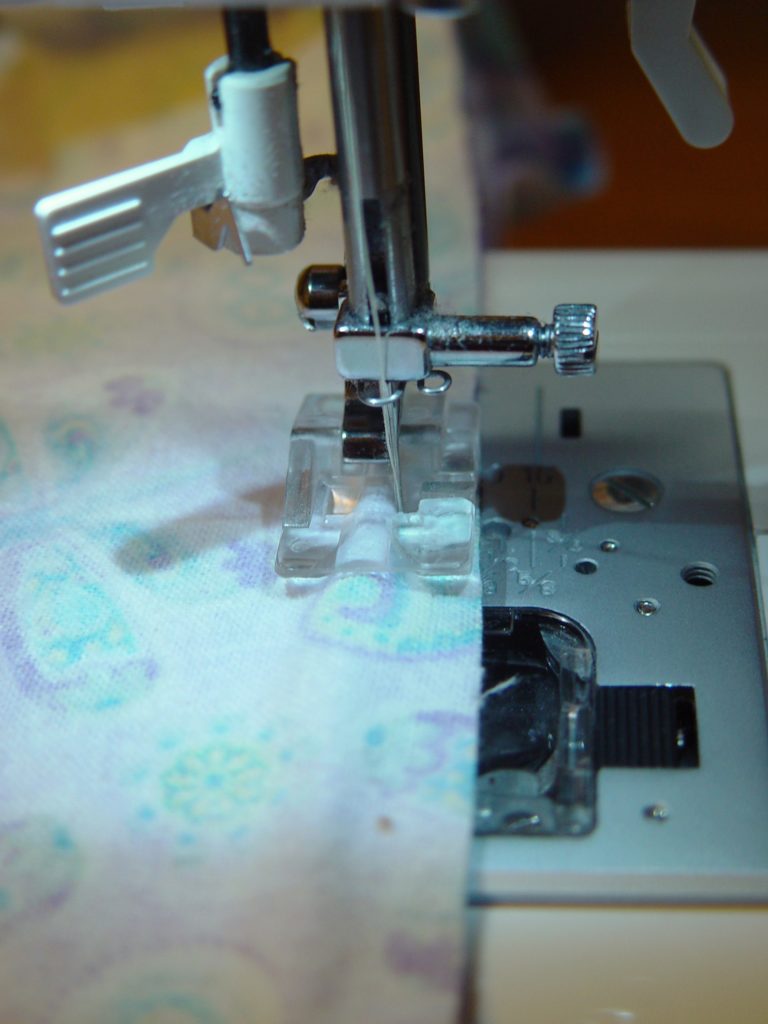 So when you open your seam, here’s what it looks like with the piping! 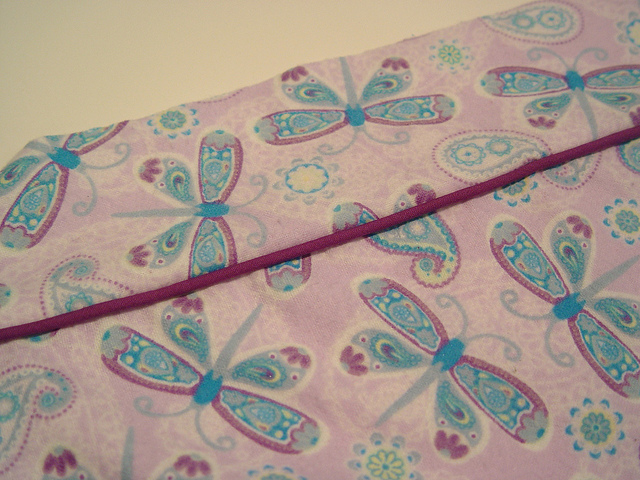 Beautiful!  So many possibilities!

39 Comments on How to sew in piping